Today I am two months old!!

I’m getting to be a big girl, and I love to romp around and play and make mischief! Kat says my bladder is about the size of a walnut, but my heart is big!! 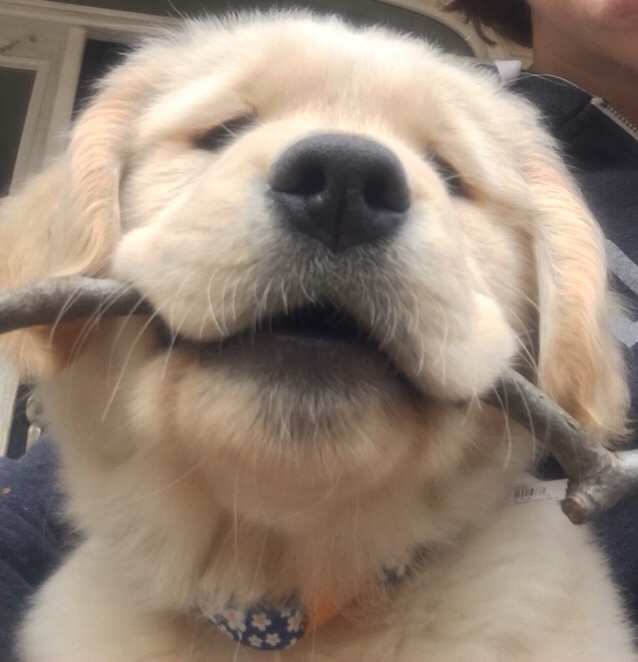 Kat likes to follow me around and know where I am all the time. I like to stay close to her, but sometimes I like to explore, too! When I’ve been looking around seeing what I can chew on I usually hear Kat call me, “Topaz, come!” Most of the time I run to her right away because she almost always has a little treat tidbit for me and I like that a lot!

I went to the vet today and it was a lot of fun!! Kat took me there and back in her car. It was my first time riding in the car with just her, and she said I did really well.

When I got to the vet I met lots of nice people and friendly dogs. I met a Brittany named Dixie. She was nice and we sniffed each other and became fast friends. I also met some sweet Shih Tzu dogs, and we liked each other, too.

Everyone loved seeing me and said I was so cute. Like this nice lady:

I wasn’t really even trying to be cute, but Kat says I just am!

There were some little girls that asked Kat if they could pet me, and of course she said they could! I loved all the attention and felt like a celebrity!

Kat told a few people about my blog and they said they would look me up. That would be fun if they did!

While we were waiting Kat praised me and told me how polite I was being by sitting beside her so calmly. 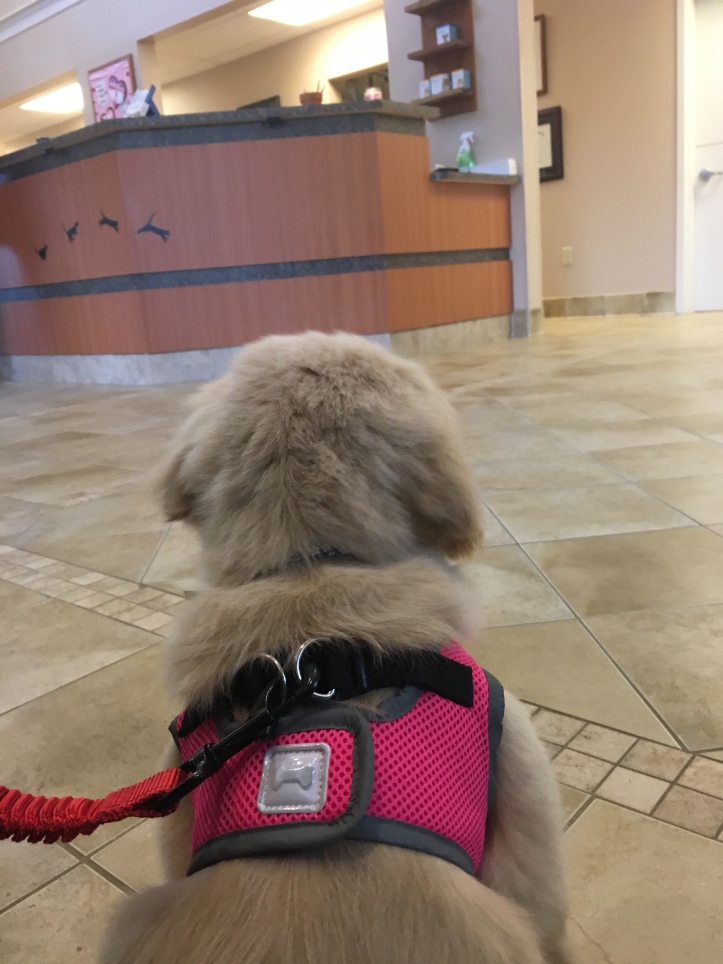 I was trying to be good so that made me happy that she told me I was.

They called me to a back room where I met a nice lady. 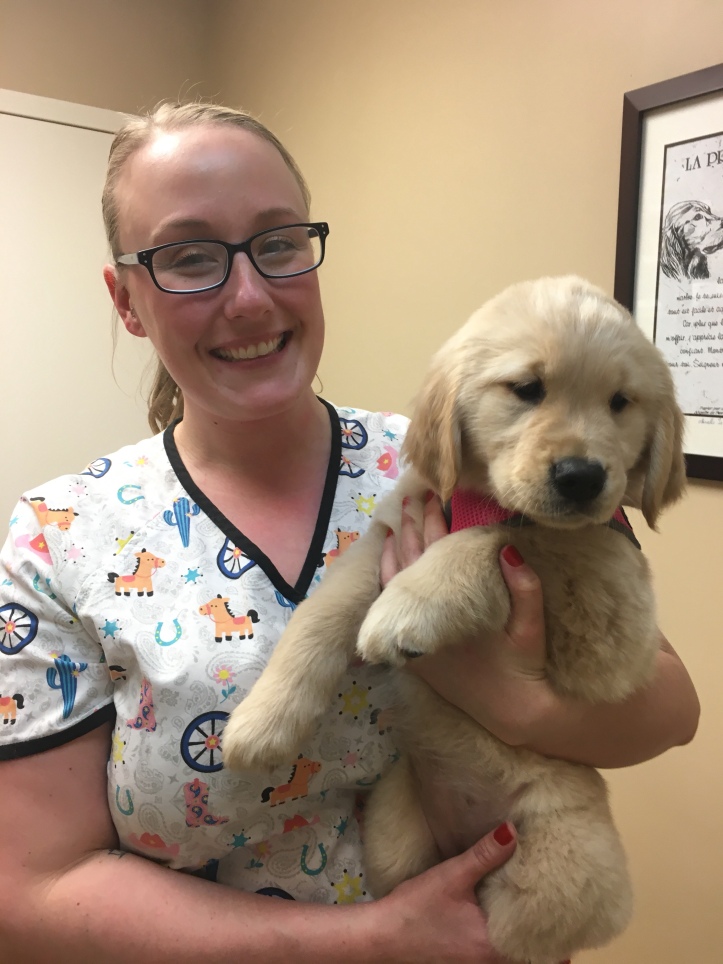 She took me to another back room where Kat couldn’t come. They were nice to me, though, so I wasn’t scared. They put me on a scale and told me I weigh 13.7 pounds. I think all those treats Kat is giving me is helping me grow!

The nice lady brought me back to the room where Kat was, and set me on a metal table. By this time I was getting kind of tired, so I fell asleep while we waited for the vet. 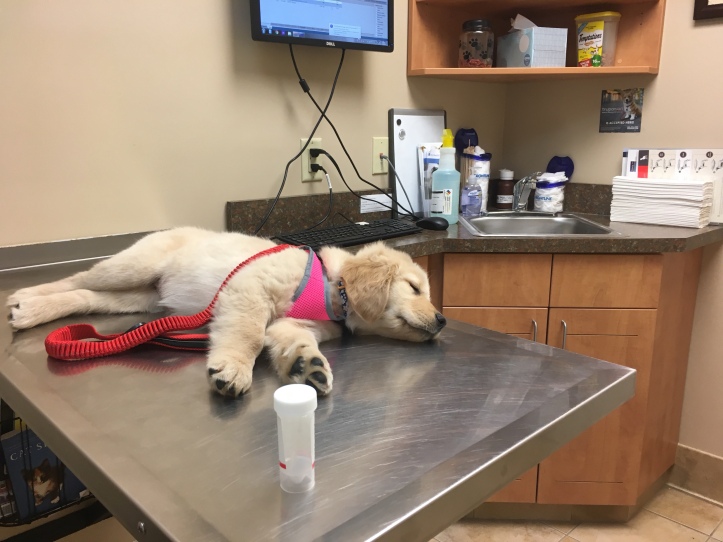 The vet came in and talked to Kat for awhile. I liked Dr. Betts because he told Kat a lot of helpful things to do with me. 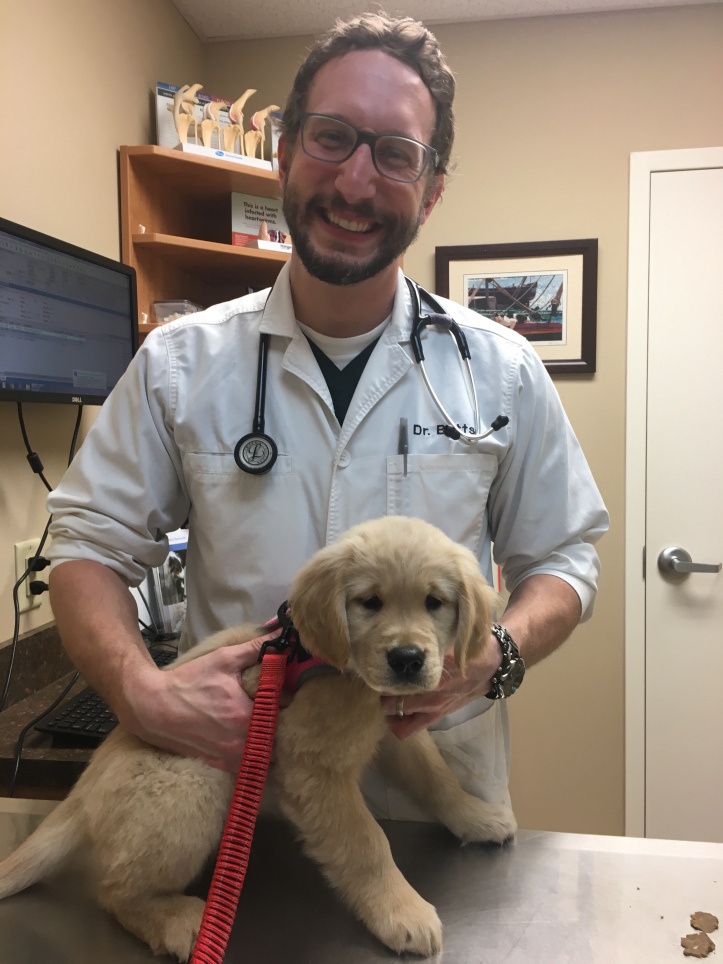 Then he poked something sharp in my shoulder. He called it a shot. It hurt a little, but I didn’t let it show, because I’m two months old and a big brave girl now.

We met some more people on the way out. One lady said she had a 13 year old golden retriever who she had done therapy work with in her school when she was a teacher in Texas. She and Kat hit it off because they had goldens AND therapy dogs AND Texas in common! We liked her a lot!

I fell asleep on the way home. It was a fun day but it wore me out! I like meeting new people.